Our Drama Club performs twice during the school year.

Spring Musical 2019, Beauty and the Beast

In early April 2019, the Drama Club's presentation of Disney's "Beauty and the Beast" was truly enchanted storytelling. Amanda Moss portrayed the determined, intelligent and caring Belle with thoughtful acting and beautiful singing. Claire Queenan, as Cogsworth, clearly embodied the motions of a clock as she delivered lines with great character. Belle's father, Maurice, was depicted by Taryn Comizio, whose strong voice and exaggerated expressions engaged the audience.

Gaston's bumbling sidekick Lefou was played by Courtney McAloon with sassy energy. In the enchanted castle, each of the household items came to life with ingenious costumes and talented singing. Alexandra Sayegh was motherly and wise as Mrs. Potts. Alexa McRedmond as Chip showed earnestness and nimbleness. Caralyn FitzPatrick portrayed the wardrobe with dramatic flair. The flirtatious Babette was well played by Katie O'Donoghue.

Fall 2018 Drama, A Night of Shakespeare

On November 16 and 18, 2018, our Drama Club presented entertaining and sophisticated theater to an appreciative audience, this time with the staging of a new adaptation of Shakespeare directed by Edie Anne Reidy.  In our Ursuline drama tradition, we approach many styles and genres of plays over the years so that all students can experience a wide range of theatrical repertoire.  This year, we again explored the words of the Bard with the presentation of  "A Night of Shakespeare."

The first act portrayed Shakespeare sleeping, and dreaming up his characters, each of whom then recited well-known monologues. The second act was an abridged presentation of "A Midsummer Night's Dream," a popular Shakespeare comedy.

Twenty-five students had the opportunity to study a monologue, character and play, and then perform the monologue. The cast shared inquiry discussions to synthesize all of the thinking that students had done about this classic writing. Yet another example of the chance to think critically and deeply about complex issues and an author's craft.  The cast discussions also prepared the actors for more interpretative portrayals of their characters. 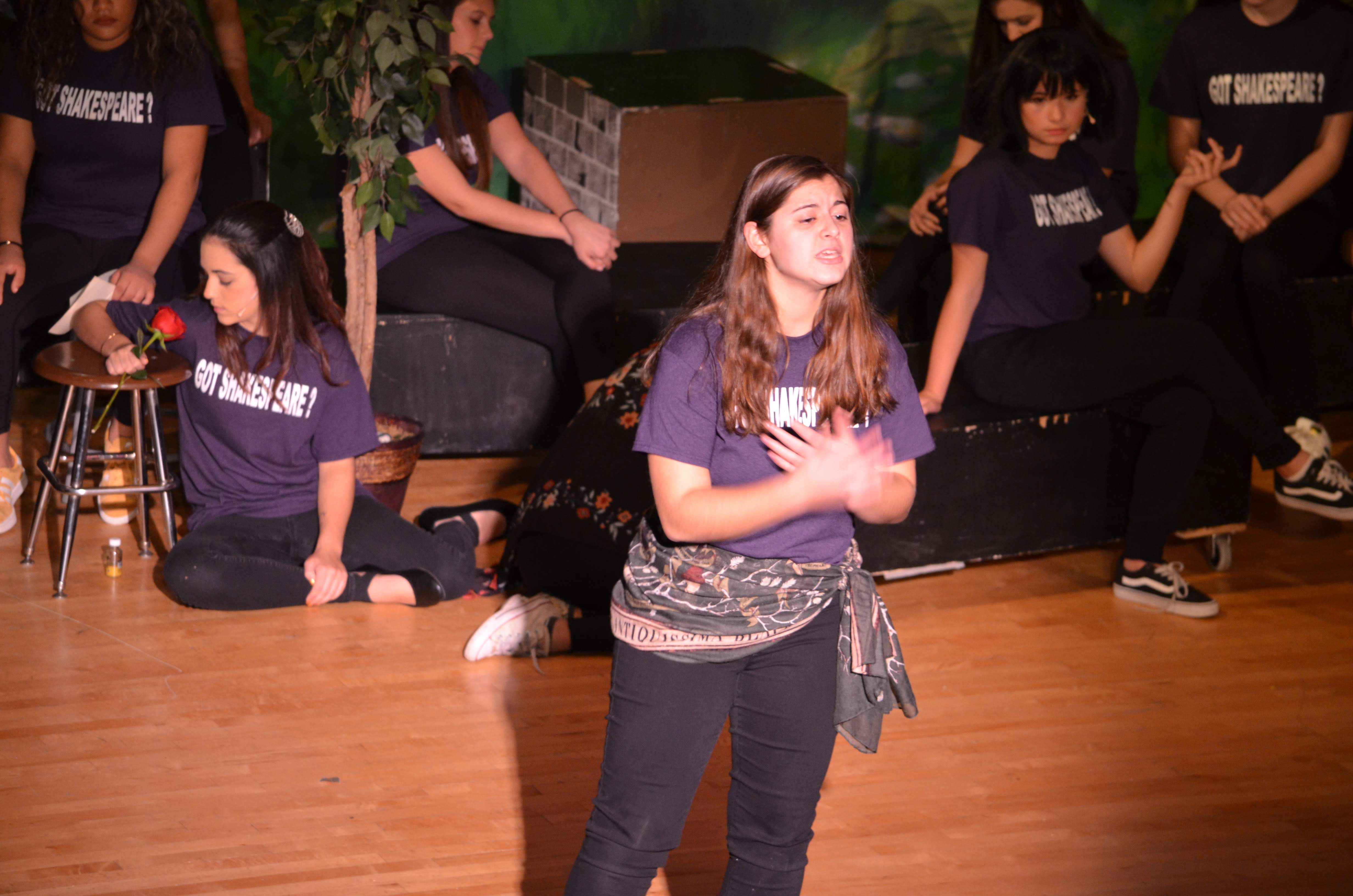 All the actors delivered the challenging lines with understanding, nuance and grace. Amanda Moss (as Shakespeare/Helena), Claire Queenan (in the role of Jane), and Alexandra Sayegh (as Mistress Ford/Hermia) were excellent on stage and provided leadership to the rest of the cast during the rehearsal process. Taryn Comizio embodied her characters with vivid facial expressions and body language. Violet Lee Cadet was heartfelt as Lady Macbeth. Courtney McAloon was compelling as the comic fairy Puck. Ava Pallotta was marvelous as Cleopatra. Congratulations to cast and crew on an exceptional Shakespeare production! And special thanks to alumnae Kaitlin Laureano '14 and Olivia Iannotti'14 who displayed Ursuline drama spirit by coming home and assisting our production.

The Ursuline School Drama Club was certainly "All in This Together" performing the energetic stage version of the 2006 Disney film "High School Musical" in April 2018.  Alexa McRedmond and Owen McKinney, as Gabriella and Troy, were great romantic leads. Their vocal harmonies and their immediate chemistry drew in the audience.  Amanda Moss delivered a compelling portrayal of Sharpay, the musical theater diva with a sassy attitude.  Sharpay's twin brother, Ryan, was played by CJ Cotza, who brought an earnest and sympathetic quality to the character.

Meghan Hartson, as Gabriella's friend, Taylor, who is president of the scholastic decathlon, sang with her characteristic emotion and excellent phrasing.  Olivia Ross was outstanding in her portrayal of Ms. Darbus, East High's eccentric homeroom and drama teacher.  Caralyn Fitzpatrick captured the creativity and quirkiness of Kelsi, the aspiring composer.

Edie Anne Reidy's direction was sharp and well-paced.  One highlight of the excellent choreography was during the song "Get'cha Head in the Game" when the basketball team members adeptly synchronized their basketballs.  The cheerleaders, led by dance captain Jennifer Nunez, expertly performed cartwheels and encouraged the crowd.  Michael Ficocelli's musical direction supported the strong vocal solos throughout.  The costumes very clearly expressed the qualities of the different high school cliques which are central to the story.

Violette Lee Cadet '20 and Carmen McGuigan '20 produced and directed an amazing Cabaret on January 18, 2019. Congratulations to all those who took part in the "Night of Broadway."

The show dazzled the crowd with outstanding comical and serious performances of the great Broadway shows such as Hairspray, In The Heights and Wicked.  Over 20 students in grades 6-12 performed.  The finale was the full cast performing "When I Grow Up" from the show Matilda. 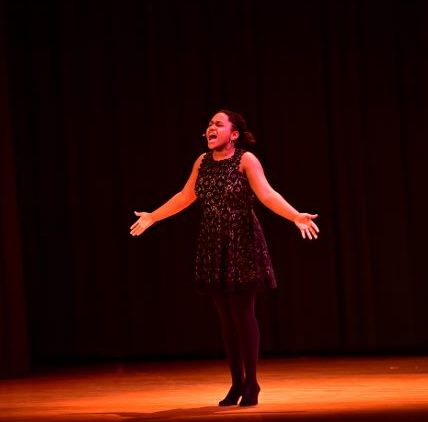 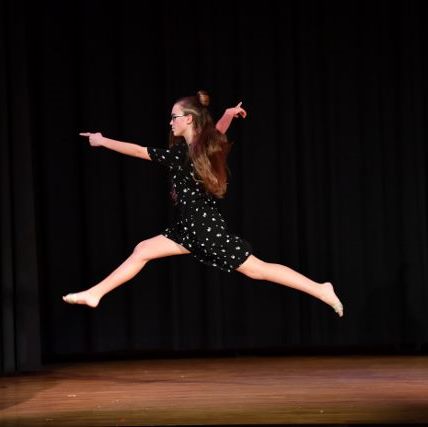 A special thank you to Dr. Adamo, who accompanied the performers, Sr. Pat Schifini, who handled the tech room and Ms. Johnson, who served as the faculty coordinator. The price of admission was a free will donation to benefit Sanctuary for Families, a non-profit organization that helps victims of domestic abuse and their children. 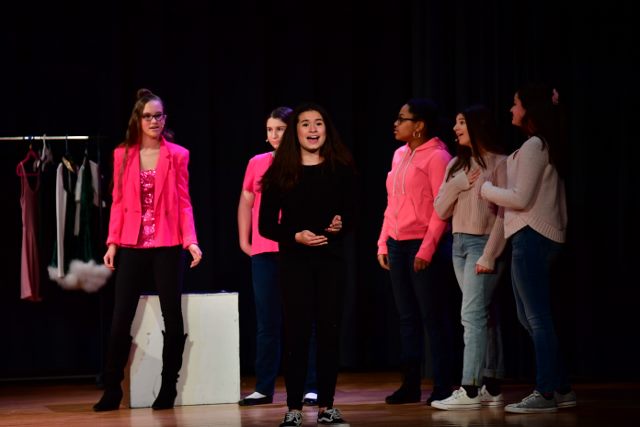 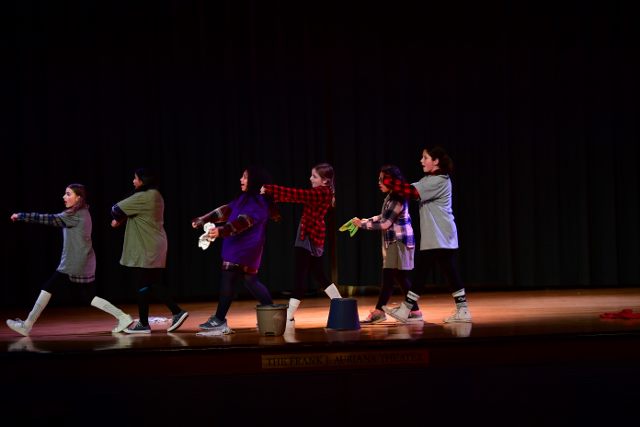 Thank you to Chris Pope for the excellent photos.

A tip of the hat to the cast and crew of "It's A Wonderful Life" who performed beautifully in The Auriana Theater shortly before Thanksgiving 2017. The audience tremendously enjoyed a seamless performance by the students. 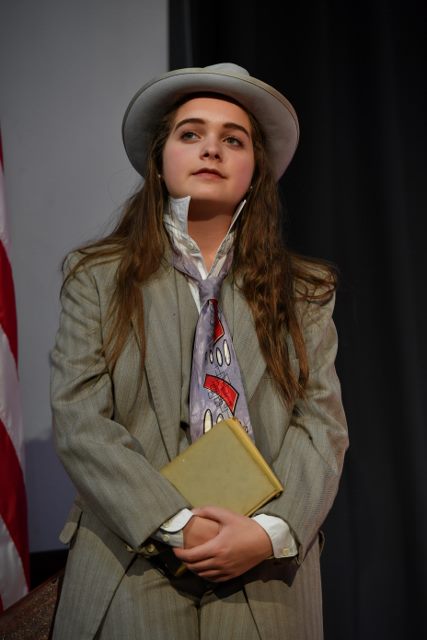 Many people have seen the 1946 film version of this classic Christmas story, which starred James Stewart as George Bailey, a man who had given up on his dreams and on life. You may recall the guardian angel, Clarence, who helps George appreciate his worth. The play reaches all with its message that every life touches so many others. You must appreciate what you have while you have it and not take the small things for granted. It is Zuzu, George Bailey's daughter, who says to her father the famous line: "Look, Daddy. Teacher says, every time a bell rings an angel gets its wings."

Outstanding leadership by senior Meghan Hartson as George Bailey and junior Amanda Moss as Clarence throughout the rehearsal process brought forth a touching and moving performance by the cast. Alexandra Sayegh, Claire Queenan and Caralyn Fitzpatrick had remarkable moments in the show. You could see the cast truly bonded and made every effort to perform at their best. The show flowed beautifully and the backdrop was stunning. We thank Chris Pope of Pope Photography for the excellent photos.

Hats off to the performers in the Middle School Musical Collage, "Camp Koala." This workshop in May 2017 featured selections from Disney films ("Mary Poppins"), contemporary songs ("Fight Song") and classics ("Singin in the Rain"). The musical pieces were selected by the girls and certain of the scenes were written by the girls. Leigh Brown also performed on the piano and showed us her soft-shoe skills. The joy and pride were evident as the girls presented their musical collage. 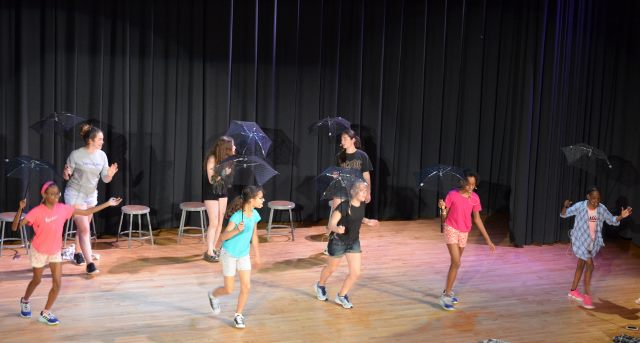 "One last kiss!" Our marvelously talented singers and actors presented an outstanding production of "Bye Bye Birdie" in March 2017. The audience was immediately captivated by the story. The solos were exceptional – in particular "How Lovely to Be a Woman" by Emma Harvey '17 (Kim MacAfee), "An English Teacher" by Ciara McAloon '17 (Rose), and "A Mother Doesn't Matter Anymore" by Meghan Hartson '18 (Mae Peterson).

The strong vocal performances by the ensemble were not surprising, as a number of our thespians are also members of our choirs and experienced, talented singers. The whole cast brought energy and showed that they were having fun! We thank the cast as well as the stage and tech crew for their hard work and dedication. 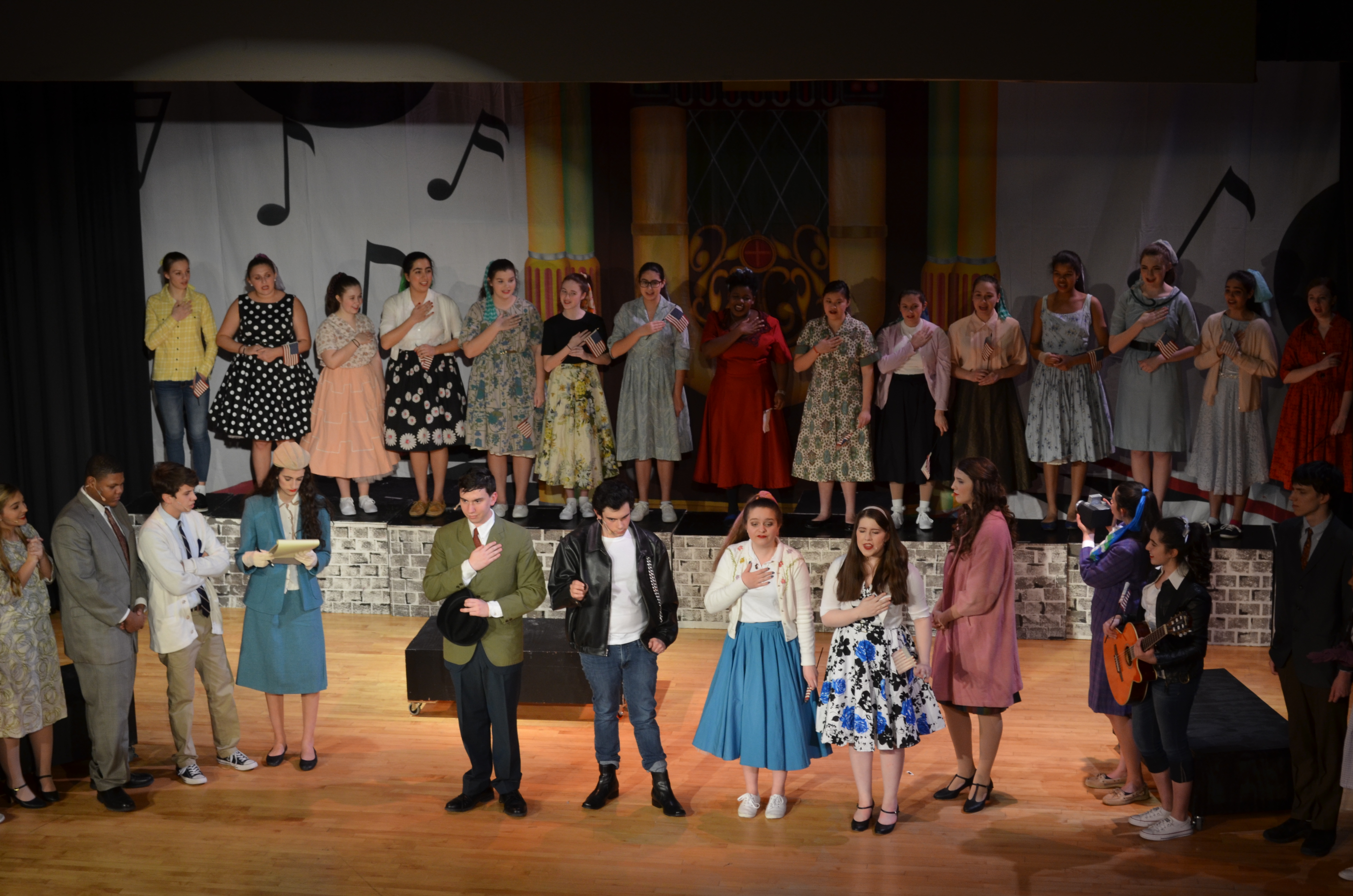 Our Drama Club presented "12 Angry Jurors" in November 2016. The play is an adaptation of Reginald Rose's 1954 hit "12 Angry Men." The whole play is set in a jury room on a hot summer day. The jurors are asked to decide whether a 19-year-old man is guilty of murdering his father. Initially, the jurors vote 11-1 for guilty but, since they are required to reach a unanimous verdict, animated conversation ensues as evidence is re-examined. At certain intervals, the action was suspended as the judge and two lawyers addressed the audience and asked audience members for their opinions on the issues raised.

The actors delivered the difficult, elaborate dialogue with poise. Violet Lee Cadet gave a wonderfully nuanced performance as the initial dissenting juror and Amanda Moss, the last juror to agree to the final verdict, was compelling as she displayed restrained anger.

In April 2016, our cast and crew put on the musical, "Little Women." The girls interpreted Louisa May Alcott's masterpiece with sensitivity and grace. Marianna Ceccatti '17, Elizabeth Vuksanaj '16, Diana Moss'16, Sarah Cosmedy'16, and Sandile Mhlaba'16 vocally dazzled us in their leading roles. Emma Harvey '17 was a delightful narrator as the author.

Particularly poignant was Betsy Vuksanaj's stunning death scene as Beth March. The ensemble delighted and the period costumes reminded us of a young America struggling during the Civil War.

In November 2015, we were delighted by the comedy "All the Great Books, Abridged." Our actors enjoyed performing parodies of 88 books, in short scenes or one-sentence summaries.

From "Animal Farm" to "Harry Potter," the range of books presented was amazing. Ensembles of actors moved smoothly from one "book" to another. Multiple references to modern-day TV shows and songs caused the enthusiastic audience to laugh heartily.